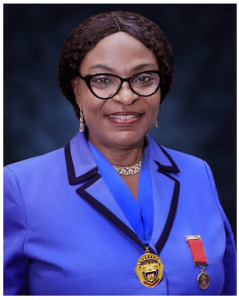 Dr. (Mrs.) Christiana Atako, former Ag. Managing Director/Chief Executive Officer of the Niger Delta Development Commission, was born on August 21, and hails from Asang Eniong, Odukpani Local Government Area of Cross Rivers State. She had her early education at Primary School, Mayne Avenue, Calabar and Union Secondary School, Ibiaku, between 1965 and 1975. She obtained the National Certificate of Education (English/French) from the College of Education, Uyo in 1978. Thereafter, she attended the University of Sokoto from where she graduated in 1984 with a First Class Honours Degree in English. She also obtained a Post Graduate Diploma (Public Relations) from the Nigerian Institute of Journalism, Lagos in 2000, another Post Graduate Diploma (Cross-Sector Partnership from the University of Cambridge in 2002 and yet another Post Graduate Diploma (Conflict Resolution Skills) from the University of Coventry in 2007.
After her National Youth Service between 1978 and 1979 at the School of Nursing, Oshogbo, she worked with the Cross River State Teaching Service Commission and Cross River State Civil Service Commission from 1979 to 1993. In 1993 she joined the Oil Mineral Producing Areas Development Commission (OMPADEC) as Assistant Director, Community Affairs, from 1995 to 2001, she was Assistant Director, Public Affairs in OMPADEC. Between 2001 when Niger Delta Development Commission (NDDC) was set up and June 2002, she was Assistant Director and Acting Head of Community and Rural Development Directorate. She became Deputy Director, Community and Rural Development in March 2003, Head, Corporate Affairs in 2007, Director, Community and Rural Development in 2010 and Director, Education, Health and Social Services in 2012. In 2013, Dr. Atako was appointed Acting Managing Director/Chief Executive Officer of the Commission.
Dr. (Mrs.) Atako has attended several courses, seminars and conferences within and outside the country and has also presented scholarly papers in several training programmes and workshops.
A versatile professional, Dr. Atako is a Fellow of several professional bodies such as the Nigerian Institute of Management; Institute of Strategic Management; Certified Institute of Public Administration and Management; Certified Directors Institute, and Institute of Corporate Managers and Public Administrators. She is also a member of the Nigerian Institute of Public Relations, Nigerian Institute of Personnel Management and Nigerian Institute of Management Consultants.
Dr. Atako who joined in the Institute in 2000 has served in different capacities at Port Harcourt Chapter and Rivers State Branch as well as national level where she has been a four time Council Member. In recognition of her sterling contributions to the development of the Institute and growth of the management profession, she was elected the National Treasurer in December 2019 and Deputy President in 2021.
Her hobbies are reading, researching and traveling. She is married with children. 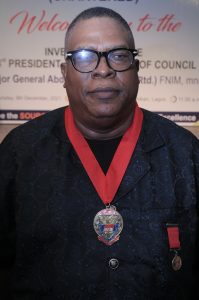 Abimbola Olaribigbe AYUBA was born on 3rd of June 1962 in Lagos, he attended St Mary’s Private School, Lagos Island, Olivet Baptist High School Oyo-Nigeria and Victory High School, Ikeja, Lagos. He joined the military as an Officer Cadet on 17 July 1980 gaining commission into the Nigerian Navy as Sub-Lieutenant on 17 July 1983. He holds a PGD in Management, MBA (General Management) both from Abubakar Tafawa Balewa University Bauchi, 1999-2001 and M.Sc. in Strategic Studies from University of Ibadan, 2010. In 2011 and 2012 respectively he attended the Transformation and Ethics Coaching Course and Performance Coaching Course at the UK Transformation School, Hampshire, UK. In 2013 he also attended the Manchester Business School. In May 2017, he completed a Certificate Course in Enterprise Management from Pan Atlantic University. In March 2020, he received a Diploma Certificate in Terrorism, Intelligence and Security from The Roman Institute/Baze University, Abuja. Commodore Ayuba held several appointments in the Armed Forces, the ECOWAS, African Union and the UN, mainly in the areas of conflict management/capacity building. He participated in building architectures of the ECOWAS Standby Force, 2005-2006 in Ghana and the Training, Evaluation and Doctrine Development Group of the AU Standby Force in Addis Ababa and Luanda, Angola respectively. Abimbola was member of a UN Subject Matter Expert Working Group on Maritime Operations in Singapore and New York in February-July 2014. Holding Fellowships of National Defence College (NDC), Certified Institute of Shipping, Nigerian Institute of Management (Chartered) and the Centre for African American Research Studies and Chartered Institute Public Diplomacy and Management. Bimbo was Director of Administration at NDC September 2005-2007, Maritime Component Commander/Deputy Force Commander, Operation Pulo-Shield, 2012-2013. Bimbo was also Commandant, Nigerian Naval College, Port Harcourt February 2013-March 2014, was Chief of Staff, Central Naval Command, Yenagoa, Bayelsa between March 2014 and July 2014.

Commodore ‘Bimbo Ayuba (Rtd.), was Director Project Implementation, Monitoring, and Evaluation Branch at the Naval Headquarters, Abuja from July 2014- 2015 and Director Armed Forces Physical Training and Sports at the Defence Headquarters, Abuja till retirement on 3rd June 2016. Having Commendations from the UN Under Secretary General for Peacekeeping for Meritorious Service, UN Medal of Honour for Service in DR Congo and Chief of Army Staff Commendation. A renowned management consultant and well sought-after facilitator, Ayuba is the CEO of both Kongolo Consult and Outsourcing Ltd. and Atlantic Force Security Services Ltd.

In recognition of his many years of service to the Institute in different capacities including serving in the Council and many committees of Council, Commodore Abimbola Ayuba (rtd.), was rewarded with the Chris Abebe Award in 2021, the same year he was elected the National Treasurer.

He is currently an International Risk and Security Management Consultant and Chairman Board of Fellows of the Nigerian Institute of Management Chartered. He is an astute manager, great public speaker and author. He is married and blessed with 2 children, plays golf, and listens to good music. 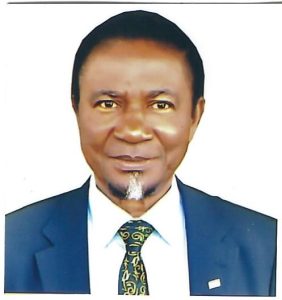 Dr. Ihenacho Raymond Nneji , a devoted, committed, loyal and  financial member of our esteemed Nigerian Institute of Management (Chartered). By dint of hard work and commitment to the Institute I rose to the highest Professional cadre of the Institute as a Fellow with membership No. 20369. I am also a serving Council member as well as Exco member of the Institute; former NIM Zonal Chairman North Central Zone for 2 terms (September 2011 –September, 2015), Chairman, NIM Maitama Chapter Election Committee, Fellow, Chartered Institute of Administration, Nigeria; Fellow and Governing Council member, Institute of Management Consultants, Nigeria; Fellow, Institute of Professional Financial Managers, London and an Accredited Management Trainer by the Federal Government of Nigeria etc. I hold a Bachelor of Arts degree in History & Sociology from the University of Ife (now Obafemi Awolowo University) in 1980, a Master of Arts Degree in Development Studies (with Specialization in Public Policy & Administration) from Institute of Social Studies, The Hague, The Netherlands in 1985 and a Doctor of Philosophy Degree in Management from ST. Clements University, British West Indies.